In the aftermath of Audrey's abduction and Nathan's struggle with Duke, alien phenomena plague Haven and a innkeeper's mother goes missing.

Aboard the Cape Rouge, Nathan knocks Duke to the floor, demanding to know where Audrey is; Duke denies knowing her whereabouts, then grabs for a gun hidden beneath a tabletop. Each man manages to disarm the other and the two grapple until Nathan's blood smears onto Duke's forehead. Duke's eyes flash silver as he throws Nathan off with superhuman strength; as he grabs for Nathan's gun, it and every other metal object in the cabin suddenly soars to the ceiling as if magnetically attacted. Duke denies responsibility for the strange incident.

Audrey regains consciousness, finding herself tied to a post in a cellar. Shortly after, a shadowed Figure descends the steps and demands to know where the Colorado Kid is. Audrey tells him to go to hell; he hits her.

Aboard the Cape Rouge, Duke demands an explanation for the new tattoo on Nathan's arm, and Nathan reminds Duke that the Crockers have murdered Troubled people in Haven for generations. The magnetic effect ends abruptly, and Nathan's gun drops into Duke's open hand; he offers it back to Nathan, insisting that he is not his father. Nathan takes the gun and hesitantly holsters it.

Outside the Haven Police Department, Dwight Hendrickson deals with the aftermath of the magnetic disturbance, prying a manhole cover from the hood of a car. Nathan and Duke arrive moments later and inform Dwight of Audrey's disappearance, and Dwight agrees to provide a cover story for the incident. Soon after, Nathan and Duke learn from Stan that second woman – Roslyn Toomey – has been abducted from the Altair Bay Inn.

Vince leaves the offices of the Haven Herald as Dave arrives; Vince meets with Dwight, who tells the journalist about Audrey's disappearnce. Dwight questions whether Dave might be involved, and Vince admits that he can't be sure before suddenly experience an inexplicable nosebleed.

Nathan and Duke travel to the Altair Bay Inn to speak with Roslyn's son, Wesley, who shows them a trail of blood that he insists is proof that his mother was abducted by aliens. Nathan remains skeptical but Duke plays along, suggesting that Wesley come to the police station where he can talk without fear of being spied on. Wesley agrees, but flees the house on his motorcycle instead with Nathan and Duke in pursuit in Nathan's truck.

With Nathan and Duke chasing Wesley, the Figure returns to the cellar to confront Audrey, thereby revealing that she is being held in the basement of the Altair Bay Inn, and demands again to know about the Colorado Kid. Audrey insists that the man died 27 years ago, explaining that it had been Lucy Ripley who had known the Kid; the Figure reveals that he knows that Audrey and Lucy are the same person, insisting that Audrey was not the only person who loved the Colorado Kid.

Nathan pursues Wesley along State Road until his truck's engine inexplicably fails; as the vehicle coasts to a halt, Nathan and Duke both realize that their cellphones have also died.

In the cellar of the Inn, the Figure leaves Audrey, who soon hears Roslyn from the other side of a wall. Roslyn claims that the Figure interrogated her concerning the Colorado Kid as well, and admits that the Kid once stayed at the Inn decades ago.

Nathan tries unsuccessfully to get the truck started, refusing to accept Duke's suggestion that aliens may, in fact, be responsible; Duke accuses Nathan of acting like a lovesick child, and Nathan reveals to Duke that, despite his affliction, he can feel Audrey's touch. Moments later, Nathan is suddenly dragged by his ankles through a nearby field by an unknown force; Duke pursues him until Nathan just as suddenly stops, and the two find themselves in the middle of a series of crop circles.

In the field, Duke and Nathan realize that their phones have reactivated, but spot a metallic object as it passes overhead; the object crashes to the ground beside Wesley's house, just down the road from the Inn.

In the cellar of the Inn, the impact causes a kerosene lamp to crash to the floor, creating a small fire that Audrey manages to douse with a bag of soil. She then uses one bare foot to drag one of the broken shards of glass toward herself.

Nathan and Duke head to the impact crater, spot Wesley's motorcycle nearby just as Dwight emerges from the house with Wesley. Nathan handcuffs Wesley to his truck mirror even as the Innkeeper claims that the metallic object is a "geoprobe" and insists that he must use his equipment to disrupt the mothership's navigational system. Dwight admits to Nathan that he has not managed to identify the source of the magnetic disturbance; Vince arrives soon after and admits that he has not heard from Audrey, and Dave arrives shortly after that to explain that.

Inside Wesley's house, Duke discovers a bizarre collection of tabloid articles concerning UFO's and government conspiracies, and find that several of the articles match the incidents that had struck Haven. The Teagues suggest that Wesley's affliction must manifest itself by playing out his obsessive extraterrestrial conspiracies in reality. Two additional articles involve lights in the sky and a hillside enclave being obliterated by an alien ship, and Duke theorizes that the pair of incidents will be the next to occur, destroying all of Haven.

In the cellar at the Inn, Audrey uses the shard of glass to cut through her bindings as night begins to fall. She admits to Roslyn that she can't remember anything about her life prior to six months ago, but the conversation is interrupted when Roslyn begins screaming as the Figure drags her away. Audrey tearfully agrees to tell the Figure what she knows about the Colorado Kid, but she is ignored as Roslyn is taken from the cellar.

After nicking herself several times, Audrey manages to free herself, finding a harvesting sickle on a workbench and heading upstairs to search for Roslyn.

At Wesley's house, Nathan and Duke confront Wesley about his affliction, but Toomey denies being Troubled, insisting that he knows that extraterrestrials are real because he witnessed his grandfather's abduction when he was a child. Lights suddenly appear in the sky, and Nathan instructs Dwight to begin evacuating nearby houses; Duke suggests ending the incidents by killing Wesley, but is interrupted when Audrey calls Nathan. She confirms that she is being held captive at the Inn, but retreats when she hears the Figure return.

Nathan, Duke and Wesley rush to the Inn as Audrey searches for Roslyn, but encounters the three men as they arrive; as Wesley continues to insist that aliens are responsible for his mother's disappearance, Audrey counters that a human abducted her, though she admits that she never saw his face. When smell something burning, the four of them head outside where they discover a body burning in an outdoor chimney; Wesley claims that the aliens murdered his mother when they decided that her elderly body was useless to them.

Moments later, what appears to be an alien mothership appears in the sky above them.

Wesley rushes into the house and starts up an antique radio-like device that his grandfather called "Old Ironsides," claiming that it might be able to disrupt the mothership's navigational system. Nathan allows that Wesley may be able to stop the attack since his fantasy has created it, but Duke again suggests killing Wesley to stop the incident; Audrey, however, attempts to convince Wesley that the attack isn't really happening, and has only been created by his affliction-fueled imagination.

Nathan realizes that Wesley's grandfather died during the previous cycle of Troubles, and suggests to Wesley that his grandfather may have sacrificed himself to save the town by joining the aliens aboard their ship. When Nathan suggests that Wesley's grandfather may still be alive, Wesley agrees to sacrifice himself, stepping out onto the porch into a beam of light. He then ascends into the sky and joins the mothership, which flies away and dissolves into the night.

Later that night, while being tended by EMTs, Duke questions Nathan about the difference between killing Wesley and convincing the man to "crawl up his own ass." Nathan counters that Wesley may return once the Troubles end, reminding Duke that Duke was willing to employ the same methods that his father used; Duke calls Nathan a hypocrite.

Nathan then approaches Audrey, who is concerned that her abductor knew about her past identities and believes the Colorado Kid is still alive. Dave and Vince arrive, and Audrey demands answers about Lucy and her relationship with the Colorado Kid. They deny any knowledge, and Vince insists that he helped to bury the Kid in plot #301 at Potter's Field. Nathan agrees to check the plot the next morning and escorts Audrey back to her car; privately, Dave and Vince agree to set their own issues in order to determine who abducted Audrey and how the Figure knows so much about her.

The next morning, Audrey, Nathan, Dwight, Vince and Dave visit Potter's Field in order to exhume plot #301. While digging, Dwight questions Nathan's decision to get his new tattoo; Nathan insists that he's only trying to protect Audrey, but Dwight warns that not everyone with the tattoo can be trusted.

Nearby, Audrey makes a cellphone call to discuss inconsistencies in Roslyn's autopsy. Moments later, Dwight and Nathan unearth the Kid's coffin and open it, revealing that it is filled with dozens of bricks. Audrey considers whether the Colorado Kid may, in fact, be alive, though Dave insists it's impossible. Beneath the layer of bricks, the group discovers a handwritten message on the floor of the coffin reading "find him before the Hunter." Stunned, Audrey confirms that she wrote the message, as the words are scrawled in her handwriting.

From an expensive house overlooking the cemetery, the Figure watches the group through binoculars as they examine the coffin. 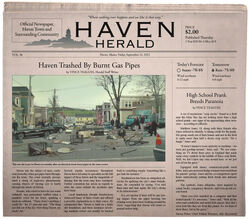 The Haven Herald covered the crop circles and magnetic disturbances in separate articles both written by Vince Teagues. In an article titled "Haven Trashed by Burnt Gas Pipes", the Teagues explained away the magnetic disturbances as the result of gas pipe explosion. The article contained a quote from man whose vehicle was hit by a manhole cover as well as a lengthy quote from Dwight Hendrickson on the sorry state of the town's infrastructure. In an article titled "High School Prank Breeds Paranoia" Teagues identified 18-year-old Matthew Jones as the culprit behind the crop circles. Jones took full responsibility for the prank, though he refused to name the three friends who helped him.