These are the relationships that Audrey has encountered throughout her life and stay in Haven. So basically it's her romantic, friendly, working and enemy relationships.

They meet in Sparks and Recreation and they begin a relationship in Roots when they spend a night together. Even though Chris is troubled, he cannot be informed of all the troubles going on in Haven, as shown in "Audrey Parker's Day Off", and got angry when Audrey couldn't tell him why she was so agitated (someone else was going to die, but she didn't know who), but even though he was angry, he still saved her by pushing her out of the way of a car that was going to kill her, killing himself in the process. The time loop restarted, so he was revived. But by Lockdown, they had broken up as Chris had gotten Audrey's spare weapon out of Evidence and almost got everybody, herself included, killed. He gave the gun to an abusive ex-husband of one of the other detainees, who was the one with the Trouble that was killing her. Audrey realized she couldn't be with him anymore. 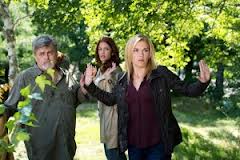 In the beginning of the series, The Chief and Audrey didn't see eye to eye. They have a particularly strained relationship, but by the end of the first season, they had become good friends. Audrey tried to console Nathan after he had lost both his fathers (his biological and his adopted father, Garland, his mother's second husband) in one day. The next time we see him in Season 2 Episode 12, "Sins of the Fathers", Audrey cannot see him as he is a ghost due to someone's trouble. Although Garland gives Nathan some bad news, he cannot be in love with Audrey. But Nathan replies, "too late".

We next see him in Season 3 episode 9 Sarah in an alternate timeline/dimension when people had made different decisions etc. In this timeline/dimension, Nathan had died trying to save Audrey from the Rev but was shot by the Rev's men after Audrey shot the Rev, although the Rev didn't die in this timeline/dimension. When Audrey saw him she hugged him and they were both glad to see each other - Garland because of that she was alright whilst "being on the run", and Audrey because he died. 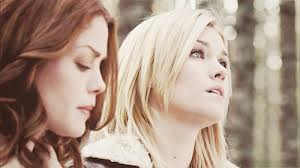 Audrey and Claire were friends and Claire was someone Audrey could talk to about things she couldn't with Nathan. Dr Claire Callahan was hired by Nathan to help Audrey get past her abduction emotionally, she was pushed to help Audrey by Nathan who let her follow Audrey around for the day to help her help Audrey. The two soon grew to be good friends. Claire helps Audrey remember her past with some therapy and it works, but Audrey begins passing out and this worries Claire. In an alternative timeline (Sarah), Claire helps Audrey escape from the Rev's men who are out for her. Unfortunately, Claire is killed by the skinwalker and her identity used to get close to Audrey.

James is Audrey's son who she had when she was Sarah in 1956. James later tracked down Lucy in Haven years later to meet his mother. This was around when it was nearing the time Lucy had to return to the barn, and the two of them looked for a way so Lucy could stay. They even worked a case together in the Holloway house. Then James was killed and Lucy was photographed at the site of his murder. So Lucy takes James into the Barn in order to save his life.

In 301, when Audrey is kidnapped by someone to figure out where the Colorado Kid is, this is when she discovers her connection with the Colorado KId and begins searching for him. In Magic Hour: Part 1, Audrey finds out that James Cogan is actually her son. From then on, she begins her search for James. In Thanks for the Memories, James is back in Haven and Audrey looks for him. They finally meet face to face in the Barn, where James believes that Audrey/Lucy had killed him to end the Troubles because she loved him. When he realizes that Arla has lied to him, he makes up with Audrey and tells her that killing someone you love ends the Troubles forever. James disappears into the barn, and is never seen again. 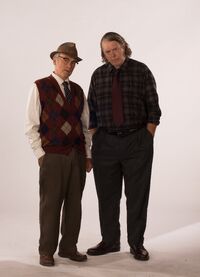 Audrey, Dave, and Vince have a long history that spans Sarah, Lucy, and Audrey's life times. They first met when Audrey was Sarah when she visited them on Duke's advice for help. They work together for a period of time until the Barn comes for Sarah. Before this, Sarah had James and left him with the Cogans and Vince had fallen in love with Sarah. They try to blow the Barn up, but are unsuccessful. Then and there (according to Dave), Vince decided that Sarah/Lucy/Audrey needed to go into the Barn. 27 years later, Sarah returns as Lucy, and they work together to help the troubled. When it's Lucy's turn to go into the Barn, she refuses, so Vince and the Guard act on it.

27 Years later, Lucy returns as Audrey Parker, and they show her a picture of the Colorado Kid murder to get her to stay. They do not tell her about her past lives and instead let her figure out things on her own. They do help her from time to time with cases. In Consumed they help her pick a dress. In Spiral they come when she calls about Garland's death.

Audrey, when she was Mara, was involved with William and together they created the Troubles. Not much is known about the time they spent together, but both of them ended up in the Barn at some point. William was trapped in the barn, as Mara spent years taking on new identities and helping the troubles. They finally meet again in the Barn, but this time, she is Lexie DeWitt. William helps her escape the Barn and back to Haven.

There she re-assumes her Audrey Parker identity, and they meet again when William is apparently "kidnapped" by two men and cannot remember anything. William soon reveals he does, in fact, know who he is and wants Audrey to be who she was originally. He also reveals that he is behind the hand pints Audrey has been seeing. This causes Audrey to strongly dislike William and wants nothing to do with him. After the events though of "The Trouble With Troubles", Audrey sets out with Nathan and Duke to kill William only to find out that she and William are connected. In "When the Bough Breaks", William baits Audrey to create a Trouble in hopes she would remember her original self. In "The Lighthouse", Audrey uses herself as bait to lure William out to grab him and when he catches onto her plot, Audrey uses her connection to William to knock them out. Inside the lighthouse and as the portal is opening, Audrey pushes William in, but his spark caused Mara to resurface and asks who is going to help her get William back.

Audrey and Charlotte are mother and daughter. When they first meet, Charlotte takes on the identity of a CDC doctor working to solve the troubles. Audrey doesn't know much about her, but when Vince gets suspicious of Charlotte, Audrey helps him out by visiting Charlotte. Audrey uses her mysterious illness to see Charlotte and when Charlotte leaves, she and Vince look around and find a folder with information on her and her past lives. Audrey later finds a ring that is identical to the one she has that belonged to Sarah. When Audrey confronts Charlotte about this, Charlotte tells Audrey she is her mother, more specifically, Mara's mother. Charlotte tells Audrey she is from another world and to take Mara away and fix what she did. Audrey is shocked by this revelation and doesn't know what to do next.