"Burned" is the 36th episode of Haven, and the tenth episode of the third season, airing on 30 November 2012.

A transport gone wrong and leaves a very dangerous troubled person on the loose, and has Audrey and Nathan searching for answers about Audrey’s identity and her connection to Haven.

Another burned body is found outside Haven andAudrey and Nathan wonder if it was one of Tommy 's victims. Elsewhere a van careers off the road and while it's moving two men jump out, each saying "gotta get away", and run into the bushes. A report brings Audrey and Nathan to investigate and find a young girl, Ginger Danvers, who wants to know where her father has gone.

Nathan tells Audrey that the Guard uses that van to transport the Troubled to Haven. They consider the father must have a significant Trouble. Claire is unable to communicate with Ginger. Duke has better luck. Claire and Audrey go off to hear Dr. Lucassi's report on the burned body.

Nathan is at the Gun & Rose Diner telling Jordan about the van and Jordan is interested in the fact that Ginger is in police custody. In the kitchen Lance is not happy with Jordan's involvement with Nathan. Lucassi shows the bolt gun wound in the skull of the burned body. He'd been dead for five to eight weeks. Dental work shows that it was Tommy Bowen. Lucassi says the person they were working with a week ago was not Tommy.

Ginger tells Duke that she wants to go out and get some ice cream and Duke can't refuse, so Duke is getting some from a street vendor, who tells him that Ginger was just taken, he thought, by her father. Duke is nonplussed. Audrey and Nathan arrive and they look for Ginger. Lance is carrying Ginger, but loses control of her when Jordan arrives. Ginger tells him she hates his guts and runs off. Lance takes his shiv and eviscerates himself. When Audrey and Nathan get there, Jordan is gone and Lance is dead. They decide that the wound is self-inflicted and Audrey surmises that it is Ginger who is Troubled and somehow gets people to do what she wants.

At the Grey Gull Duke is in Ginger's thrall and is playing pirate for her until Audrey and Nathan arrive and Duke falls off the upper balcony. Nathan checks Duke while Audrey asks Ginger what happened in the van. She told the people to leave her alone and they fled. She thinks that her father wanted to get rid of her. Audrey tells Nathan that Ginger's Trouble probably started when her mother died and, bringing her father back, he could convince her she is still important to him.

When Nathan hears that Jordan was there when Lance died, he goes to bring her in for interrogation. Instead she tells him about an uncle that Ginger has in town, who the father and daughter were going to stay with, so Nathan goes to see him. Lucassi phones Audrey who is looking after Ginger at the Gull and tells her that the burned man was at a rope factory before he died.

With Nathan off on a wild goose chase, Jordan sneaks in while Audrey is out on the phone to lure Ginger away, but outside Audrey stops her and Nathan arrives to arrest her. They go back in and Ginger forces Jordan to answer Nathan's questions. Jordan explains where Danvers is and that the Guard wanted Ginger in order to control Audrey through Nathan. Though Audrey was immune to Ginger, Nathan wasn't. Jordan says, when Lucy Ripley's time was up she refused to go into the barn and almost escaped. When she enters The Barn the Troubles go away for 27 years. When Audrey and Nathan break into the Guard's safe house and rescue Danvers, they are caught by a Guardsman named Kirk Bowers, so Nathan is forced to make a deal to release Jordan in exchange for Ginger and her father. Reunited with her father Ginger's Trouble stops, so Duke drives them away to a new place of safety.

At the police station Audrey works out where the bolt gun killer is hiding and she and Nathan go to investigate. Inside the abandoned factory they find water-filled tanks containing complete human skins, including Tommy's and Grady's. The killer has skinned people and burned them to hide the loss of the skin. Nathan says the bolt gun only minimally damages the skin. Native Americans have a legend about skinwalkers who can wear skin like a suit. There is an empty tank and the killer is out there somewhere in the skin.

Coverage in the haven Herald[] 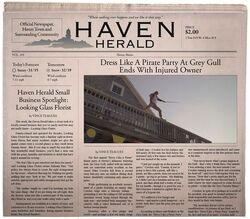 Vince Teagues explains Duke Crocker's bizarre behavior and terrible fall from the Grey Gull as part of a "Dress Like A Pirate" party that Crocker was holding that the Gull. No explanation for Lance Zerner's abrupt public suicide is given and there's no coverage of the bad car accident that the Guard's transport van was involved in. The paper does have a small feature on the Glass Florist a local Haven small business.

Audrey: You took her out of the station?
Duke: She said she was hungry.
Nathan: There's food in the kitchen.
Duke: You mean the coffee and Slim Jims?