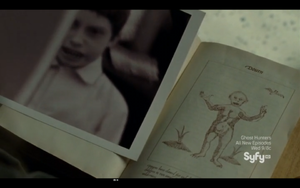 Douen (pronounced /'dwɛn/) are creatures from Afro-Caribbean legend. They have large blue circles surrounding their eyes, and sharp, fang like teeth, similar to those of an anglerfish. They can rapidly vanish and appear again in a new location. They have sharp clawed feet and hands and have a laugh that enchants children to run away from their parents and go deep into the wilderness. Douens are masters of deception and can steal away "even the most protected child." They are particularly good at misleading search parties and their victims are never found.[note 1]

Braer Brock and his wife Carmen had been trying to have a child for years, even trying expensive and painful in-vitro fertilization procedures.[note 2] The recent revelation that Valerie, Carmen's sister, had gotten pregnant again, and without even trying, activated Braer's Trouble. Braer who saw Carmen, the principal at Sunnyside Preschool as a natural mother, felt guilty about not being able to provide her with a child of her own. When his Trouble activated, it took the form of four Douens who bewitched the three children that Carmen was closest to, guiding them through complicated escapes from their parents. Under the enchantment of the Douen, Harper and Kent each built intricate towers to help them reach escape that was far out of their reach (a vent and a hidden key respectively). Ben, Carmen's nephew, not only escaped from his locked room, but dressed and propped up a teddy bear to fool his mother into thinking that he hadn't left. 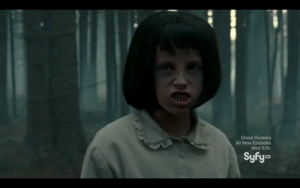 The Douen also bewitched Carmen, guiding her and the children to a clearing in the Chatham Woods.[note 3] Once there, the Douen kept Carmen and the children in a trance, forcing them to play Ring Around the Rosie.[note 4] Carmen was briefly able to snap out of the spell when she saw Harper collapse from the cold, but the Douen quickly re-enchanted her.[note 5]

When HPD Chief Dwight Hendrickson and Detective Nathan Wuornos attempted to rescue the children, the Douen attacked them, ripping at their clothes and skin with their clawed hands. When Wuornos confronted Braer about the tests from Haven's Hope that showed that he was the reason that Carmen couldn't get pregnant, he broke down, saying "it's my fault". Once Braer had accepted his guilt, the Douen disappeared, freeing the children and Carmen from their spell.

In the real world[]

Douen are a very real part of Trinidad and Tobago folklore. They are believed to be the lost souls of children that had not yet been baptized or christened. Their most recognized characteristic is their feet, but not because their feet are clawed as they are in Lost and Found, but because their feet are said to be backwards, with the heel facing the front. Also unlike the portrayal in Lost and Found, where the Douens are wearing blouses with lace collars and dark trousers, folklore says Douens wear no clothes at all, except for a floppy straw hat.[note 6] The real-world legends of Douen also say that they call children with a "whooping sound", not a laugh.