< Haven Herald
Edit
watch 01:36
We're Getting Mutants in the MCU - The Loop
Do you like this video?
Play Sound

Volume 98 of the Haven Herald was released online by Syfy. It covers the events of "The Farmer", providing a cover-up for the patients who'd been admitted to the Haven Medical Center with organ failure. The article includes quotes from Dr. Rudy Lucassi, who consulted on the cases. There is no mention of the deaths caused by Harry Nix. The Herald also had a column on staying healthy during cold and flu season. 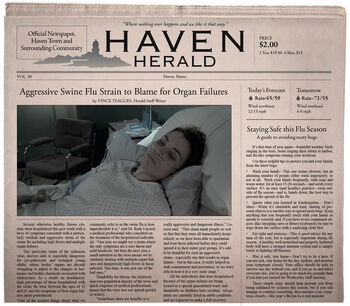 
zens were hospitalized this past week with a
bevy of symptoms consistent with a particu-
larly virulent and aggressive strain of the
swine flu including high fevers and multiple
organ failures.


This particular strain of the infamous
virus, doctors said, is especially dangerous
for pre-pubescent and teenaged young
adults, whose bodies' organs are already
struggling to adjust to the changes in hor-
mones and bodily chemicals associated with
adolescence. As a result an inordinately
high percentage of those hospitalized with
the swine flu were between the ages of 12
and 25, and the symptoms of the organ fail-
ures more pronounced.


"One of the scariest things about what we
commonly refer to as the swine flu is how
unpredictable it is," said Dr. Rudy Lucassi,
a medical professional who consulted on
the treatment of the hospitalized individu-
als. "One year we might see a strain where
the only symptoms are a sore throat and
mild headache, but then the next year a
small mutation in the virus means we're
suddenly dealing with multiple organ fail-
ures and dangerously high fevers in those
infected. This time, it was just one of the
bad ones."

Thankfully for Haven, the relatively
spacious population density of the town and
quick response of medical professionals
meant that the virus was not spread quickly
or widely.


"Sometimes there are benefits to a
really aggressive and dangerous illness," Lu-
cassi said. "This strain made people so sick
so fast that they were all immediately hospi-
talized, so we have been able to quarantine
and treat those infected before they could
spread it to their entire peer groups. It's odd
to be thankful for such an aggressive
strain—especially one that results in organ
failure—but in this case, it really helped us
with containment and prevention, so we were
able to beat it at a very early stage."


All the individuals that were hospitalized
because of the organ failures are being
treated in a special quarantined ward, and
thankfully no fatalities have resulted. All pa-
tients are currently listed in stable condition
and are expected to make a full recovery.


singing in the trees, boats ringing their return to harbor,
and the flu-like symptoms ruining your weekend.


Use these helpful tips to protect you and your family
from the latest bugs:

alarming number of people either wash improperly, or
not at all. Wash your hands frequently, with soap and
warm water, for at least 15-20 seconds—and scrub every
surface. It's and easy (and healthy) practice—even out-
side of the flu season—and is, hands down, the best way to
prevent the spread of the flu.

share—While it's charitable and kind, sharing of per-
sonal objects is a surefire way to spread nasty bugs. Keep
anything that you frequently touch with your hands or
mouth to yourself, and, if you have to use communal ob-
jects (like shopping carts of library keyboards) be sure to
wipe down the surface with a sanitizing cloth first.

time of the year, but is especially important during flu
season. A healthy, well-nourished and properly hydrated
body will have a stronger immune system and is simply
better at fighting off diseases

you are sick, stay home for the day, hydrate, and monitor
your symptoms closely. Your office should be able to
survive one day without you, and if you go in and infect
everyone else, you're going to be much less popular than
if you had just missed the Wednesday staff meeting.


These simple steps should help prevent you from
being sidelined by sickness this season, but if you still
manage to contract something, then monitor your symp-
toms closely—this year's flu can be a real monster.