Ian Haskell was a descendant of Tristram Carver, an associate of Duke Crocker, and a resident of Haven. He possessed the ability to steal the afflictions of other Troubled individuals by absorbing their blood.

In 2010, he attacked Jackie Clark in Bangor, stealing her ability to make people hallucinate their worst fears when they looked into his eyes. Using that ability, he went about breaking into various locations, including a folk-art museum in Maryland, in order to steal the pieces to an 18th Century puzzle board. In October of 2010, Haskell attended the memorial service in honor of the recently deceased Haven Police Chief Garland Wuornos at the Grey Gull, using the opportunity to cut Nathan Wuornos and steal his idiopathic neuropathy so that he would feel no pain.

He then met with Crocker and offered to pay a substantial sum of money for transportation to Canada. Using Nathan's ability, Haskell broke into the Fisheries Museum of the Atlantic that night to steal the puzzle board itself, and that night he tested the board by placing a piece in its location, causing a hotel to collapse in Haven. He returned to Crocker's boat, grabbing hold of a recently-welded railing, and waited as Crocker left to pick up a piece of navigation equipment. Soon after, Brian Shaw and Jackie arrived, and Haskell took them hostage, but when Crocker returned with Wuornos and Audrey Parker, Jackie ambushed him.

Parker shot Haskell in the arm and Wuornos shot him in the chest, but before Haskell died, Wuornos wiped a bit of Clark's blood on Haskell's skin, causing him to absorb her affliction and curing her upon his death. 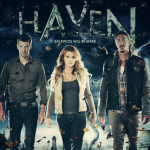