"Last Goodbyes" is the 37th episode of Haven, and the eleventh episode of the third season, airing on 7 December 2012.

As the time of her 27-year disappearance draws near, Audrey wakes up one morning and discovers that everyone else in Haven is unconscious...except for one man.

At the Bolt Gun Killer's lair Audrey and Nathan tell Claire, Duke, Vince, Dave the killer may look and talk like his victims but it is a performance and he makes mistakes. Knowing the person he impersonates will help spot mistakes and identify him. They will all be looking for the killer, but first they have to be eliminated from the suspect list. Outside, the M.E. uncovers the killer's dumping ground of victims used for parts and has corpses on makeshift tables. One is a young woman with one puffin earring.

We jump ahead to the next day as Audrey heads for work she discovers everyone in the town has collapsed and is asleep where they fell. As she walks around town she finds a man with one red shoe who is not asleep, he has amnesia and Audrey is suspicious. As Audrey investigates what is going on in Haven, she flashes back to the day before where she interviews Claire, Duke, Nathan and the Teagues to see if any of them could possibly be the Skinwalker. She interviews Claire first, so that she can help her with the rest of the interviews.

She asks him to take her to the place where he woke up. Near where he takes her there is an ambulance, inside which is a red shoe. She then concludes he was ejected from the vehicle and could be Troubled, so responsible for everyone being asleep. At the station Audrey tries to identify the red-shoed man from the ambulance logs, but internet is not functioning. He explains exactly what he has retrograde amnesia is, indicating precise medical knowledge, so Audrey gets him to examine Nathan and he realizes that Nathan isn't sleeping but in a coma that leads to death in twelve hours. Trying to jog his memory Audrey discovers he likes basketball and he remembers a team mascot. At the Grey Gull she shows him the mascot and a photo of the players, one being him, with the name Will Brady. This leads to the Brady house where Brady turns out to be an archaeologist, so his knowledge about comas is unexplained.

Audrey finds a puffin earring and accuses him of being the killer after all. She throws the earring at him and it jogs his memory: the earring belonged to his friend, Erin. Audrey takes him back to the lair and seeing Erin's body sparks a memory of walking back from a movie two months ago with her. He was knocked down and, as the killer grabbed Erin, said "hush", using a bolt gun. That was the last thing he remembers until this morning. Audrey thinks he may have been in the hospital for the intervening two months, so they go to the hospital, where they find his bed. His chart shows he has been in a coma as a result of head trauma and if he were taken off life-support he would stop breathing in twelve hours. Audrey wonders how he knew all about the coma if he were in a coma and he explains that some people can still hear even in a coma.

The ambulance was taking him home to die. Audrey thinks that hearing he was going to be unplugged triggered his Trouble. He says that everyone is dying now just as he would have and they realize he has to go back into the coma. Back at the ambulance he gets back onto his bed and sinks into the coma. The driver comes out of his coma, as does everyone else in town. Audrey sends him back to the hospital to life-support, as he could understand what people were saying even in his coma.

Later, above the Grey Gull, Audrey and Claire are talking about Vince and Dave, trying to figure out who the killer is. They are reviewing the interrogations which failed to illicit any clues about the Bolt Gun Killer because everyone passed their interrogations. Claire thought that one of the Teagues could be the Skinwalker because they didn't really give any specific information about themselves other than one of the brothers would realize that the other was the Skinwalker. Audrey is going over their interrogation with Claire when Claire mentions that they were tortured over information about The Colorado Kid and the Barn. Audrey is confused, not remembering about them talking of the barn. She reiterates that the Teagues didn't mentioned the barn so Claire tells her to hush. Audrey remembers Brady's attacker, the skinwalker using the same language and quickly attempts to backtrack. It's not quite enough as Claire takes out a gun and points at Audrey asking, "What gave me away?". 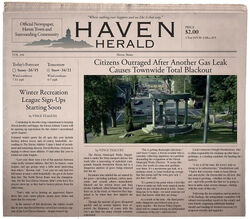 The Haven Herald's front page story blamed the town wide blackout on yet another gas leak, this time a mixture of methane, carbon monoxide and other gases were leaked into the air. The article includes quotes from a local resident, Grace Cooper, who responded to the events by collecting signatures on a petition demanding the resignation of the Haven Municipal Works Director. The Herald goes on to report that the Haven Police Department is planning to commission an "independent evaluation of the city's infrastructure." The article also quotes Dwight Hendrickson. The other article on the front page of the Herald announces sign-ups for Haven Athletic Center's winter recreational sports leagues.