Magic Hour: Part 2 is the 33rd episode of Haven, and the eighth episode of the third season, airing on 9 November 2012.

Audrey and Duke unwittingly team up with the killer they’ve been hunting all season as they track down the only person who can save Nathan’s life.

Thinking quickly Audrey decides they have to find Noelle, who can save Nathan. When Duke sees blood where Noelle went into the bushes, they know she was hit by a bullet and Audrey concludes that she will contact her paramedic boyfriend, Joseph Brentner, so they follow Joseph. At the Haven Herald Vince figures that when the bolt-gun killer broke into the office he was after something specific. Joseph leads Audrey, Duke and Tommy to a house, inside which they separate and search for Noelle. Tommy finds her and smothers her. Both Nathan and Noelle are put in the trunk of their car. Audrey thinks that if they can find Moira and trigger the family Trouble, Moira can bring both Nathan and Noelle back.

There are only a few hours till sunset. Audrey talks to Joseph to understand Noelle's Trouble and discovers that Noelle shares the scars of those she resurrects. He tells about the car accident that killed Noelle's father. The police had found the two girls standing in the road, apparently ejected from the vehicle. At the Herald Vince and Dave have been searching for sign of the bolt-gun killer, when Vince finds that one of the keys, the one to their fishing shack, is a new copy. Audrey manages to track down and arrest Moira, who tells Audrey that it was Tommy who shot Nathan, which explains to Audrey why Tommy has been acting strangely all day. She calls Duke, who is searching for Moira with Tommy, and tells him, saying he should watch him until Nathan can be resurrected.

Jordan arrives at Audrey's location, having tracked Nathan's phone, and Audrey shows her Nathan, telling her that Moira's Trouble must be triggered to save him. Duke is now acting tense with Tommy. Audrey and Jordan show Moira her sister's body, but Moira is unmoved, so they need Duke to test her blood to see if she is Troubled. Tommy has decided that Duke has been lying to him and in the ensuing fight Duke, touching Tommy's blood, realizes that he is Troubled. Before Tommy can shoot him, Jordan arrives and touches Tommy with her tazer hands. He escapes and Jordan tells Duke they can't follow him, as Audrey needs him. At the house where Audrey has Moira Duke finds that Moira is not troubled. The sun is very low.

At Vince and Dave's fishing shack the Teagues brothers are surprised by Tommy. When Nathan is brought into the room Moira tells Audrey that it makes one feel crazy to see a loved one die and explains about waking up in the truck to find her father dead after a tool box had hit her in the back of the head. Audrey understands that Noelle had resurrected her sister and shows her the identical scar on Noelle's head which Moira has. Moira refuses to accept it, saying that it would mean that Noelle saved her and not her dad, for Moira had never forgiven her sister for not saving their dad. The father had said that only one person could be resurrected in one day, otherwise it would be too much strain and could kill Noelle. The impact of this knowledge with the awareness of her own bad treatment of her sister for not saving their father causes Moira great emotional distress.

As the sun is setting she hopes her Trouble has been triggered and touches both Nathan and her sister, but nothing happens. Overcome with grief, Audrey, with Duke and Jordan watching, tells the dead Nathan that she has always loved him. Duke, who has gone to Moira, notices her blood has changed: she is now Troubled. The sun sets. Nathan revives and asks where the funeral is. Moira has absorbed both their deaths and Noelle wakes to learn that her sister had resurrected two people. As Moira dies, Nathan remembers Tommy. He and Audrey leave to find him, working from the GPS info from his car. Tommy has been torturing Vince and Dave at the fishing shack regarding the Colorado Kid and the barn, when Audrey and Nathan arrive. He escapes by boat and they shoot to take out the engine and stop him, but the boat explodes and they watch plumes of black smoke billow skywards from the boat in flames.

At the Grey Gull Dwight has Noelle and Joseph in his truck with Moira dead behind them. Audrey tells Noelle that when Moira wakes up things will be different. Nathan tells Audrey that the person in the surveillance video was clearly not Tommy and asks why he was killing the women. Jordan wonders what has happened to her relationship with Nathan. Audrey later alone, a fog has come in, is confronted by Vince, who admits that he has been deceiving her and says he wanted to apologize before she went. She asks him who the father of the Colorado Kid was, but he says Sarah never told anyone. He looks out to the island in front of the Grey Gull to see in the fog a barn on it, though Audrey can't see what he is looking at.

Coverage in the Haven Harold[] 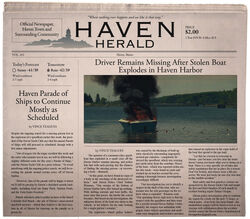 The Haven Herald has two articles covering the boat explosion near Haven Harbor. The first article was about the investigation into the wreckage and the search for body of the driver, whom the Haven Police Department considered the main suspect in the boat theft. Police Chief Nathan Wuornos is quoted in the article, which also mentions that the Haven Yacht Club sponsors boat safety courses. The second article covers the annual Parade of Ships, which was not delayed after the explosion at Haven Harbor, though minor changes were made to the planned event.