"Over My Head" is the 30th episode of Haven, and the fourth episode of the third season, airing on Syfy on October 12, 2012

Haven is plagued by a mysterious series of drowning deaths in the nearby ocean.

Nathan shows Tommy an ATM video of a woman being killed by the man with the bolt gun. The man, who has a Guard tattoo, scalped the woman. Nathan tells Tommy it is a serial killer.

Across town Claire uses Audrey's locket to try to help Audrey remember from her past life the day The Colorado Kid died, but without success.

At the swim center Alice Hargrove, the swimming instructor, is trying to coax Frank Bentley over his fears into the pool. Suddenly the water erupts and she is pulled down into a pool of blood.

Dr. Lucassi, the M.E., tells Nathan that whatever killed her was big and wonders how it got into the pool and where it went. Duke turns up uninvited and Nathan disapproves of his presence in a police matter. Bentley explains that his regular teacher, Daphne, was not around so Hargrove tried to give him his lesson.

Back at the station the Teagues want to know about the ATM killing, but Nathan wants them to tell him about the tattoo. They tell him about the Guard, the people with the tattoo, who have been in Haven for generations, people who protect the Troubled. One, named Jordan, can be found at the Gun and Rose Diner. Nathan has decided not share information, but tells them that the killer had the tattoo. The Teagues leave, thinking that perhaps they can leverage Tommy into providing information. Claire gives Audrey the locket she'd left, but, as she does, Audrey flashes back to May 22nd, 1983, where she recalls finding the body of the Colorado Kid on the beach. She snaps back to the present as Nathan comes in with a shark's tooth removed from Alice's leg.

Duke is outside the station as Nathan and Audrey exit. As Nathan expresses his disapproval, a wave of sea water rushes down the street and throws a car against a wall.

They haul a soaking man, Reed Harris, out of the car. He has a bleeding leg. Audrey receives a call telling her Bentley is dead. Nathan says that after Harris has dried himself up he wants him at the police station. The Teagues have decided that Tommy has something to hide and is lying low in Haven. At the autopsy table Dr Lucassi explains that Bentley drowned standing up in his shower. His wife had said that he'd attempted to contact Daphne all morning. Audrey decides to investigate Daphne's disappearance and takes Duke who she tells to try to reach her by phone. Daphne's next door neighbor, Bob Harmon, comes across to speak to Audrey, who asks him about Daphne, but as she does he breaks out with an infestation of tiny black crabs.

Nathan has lunch at the Gun & Rose Diner and meets the gloved Jordan McKee, a waitress. She doesn't trust him, but agrees to meet him after work.

At Daphne's, as the ambulance leaves, Audrey explains that Harmon has no permanent damage. She believes that the mysterious Daphne might be the thread that links all victims. Daphne seems to link all but Harris. Harris hasn't been to the station so the three go to find him.

Vince discovers that there is a sealed Internal Affairs file regarding Tommy in Boston PD records that may explain why he is hiding in Haven.

Audrey, Duke and Nathan arrive at Harris's house to find all of the windows cracked in a particular pattern; they then discover Harris lying outside, bleeding out from the cut on his leg. Dying, he explains that he accidentally ran a car off the road over the edge into the ocean. The best theory is that Daphne was in the car and so all the victims are tied together. She must still be alive, given the events of the day.

Daphne is in her car in the water, a shark in the distance, her leg is cut and there are tiny crabs coming in through the vents. She struggles to reach her phone, which displays 12 missed calls from Duke Crocker; at the Harris residence, Duke suddenly begins drowning on dry land.

Audrey manages to revive Duke, and the three work out where Daphne is and go to rescue her. They see the car in the water with the tide rising fast. To Nathan's consternation Duke rappels down the cliff and goes to the car. Nathan thinks that Duke is going to kill Daphne to end her trouble, but Audrey insists that Duke is not that kind of person. As he does he dislodges a few rocks and more start to fall. Duke explains that she is causing them to fall, but, realizing she can't stop it, he reaches in and touches her bleeding leg. This triggers his Trouble giving him strength to rip the door open, tear the steering wheel out, and rescue her.

Duke arrives at the hospital to see how Daphne is. Claire is attending her and Audrey apologizes to Duke.

At the Gun & Rose after work, Jordan explains that the tattoo is only for the Troubled. She explains her Trouble, taking off her glove, is that her touch causes excruciating pain. Nathan asks if she has some level of control over it and she says no, which is why she never had physical contact with anybody for years. Nathan, sensing her pain, takes her hand. She is freaked, worried that she might incapacitate Nathan, but he explains that his Trouble is that he doesn't feel anything. Realizing that something like this rarely happens to Jordan, he offers to do anything to gain the Guard's trust.

The Teagues come to blackmail Tommy over a shooting in Boston. He responds by saying that they seem to own over half the commercial real estate in Haven and have millions of dollars in off-shore bank accounts. He proposes that they stay out of each others' business.

Elsewhere the serial killer places the scalp on a dummy head, spraying the hair with ammonia to brush the blood out.

At the Grey Gull, Audrey dreams of the Colorado Kid on the beach and, turning to see a barn, she wakes up. Moments later, Agent Howard walks towards her bed and tells her to stop remembering. Then she wakes up for real the next morning. 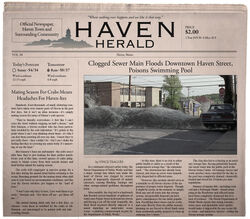 The Haven Herald ran two stories about the effects of Daphne Harris' Trouble. The main article is on the flood on Poplar Street. The Haven Department of Public Works released a statement saying that the flood was caused by a clogged sewer line. This clogged sewer line is also used to explain the blood in the water at the Haven Swim Center; it's referred to as "potentially hazardous waste water". The article calls report of marine life in the flood water "rumors" and dismisses these reports out of hand. The second article discusses crab mating season and explains the thousands of crabs in downtown Haven as a normal occurrence in the mating cycle. The article contains quotes from Bob Harmon.