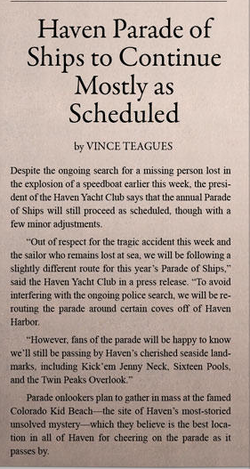 The annual Parade of Ships is a yearly event taking place in November hosted by the Haven Yacht Club in Haven, Maine.

The ships in the parade pass by the Haven Harbor, Kick'em Jenny Neck, Sixteen Pools, and the Twin Peaks Overlook. Onlookers gather on the beach near the Tuwiuwok Bluff, sometimes referred to by locals as the "Colorado Kid Beach".[1]

The 2010 Parade of Ships had to be slightly rerouted as to avoid areas of the Haven Harbor where the HPD was looking for the body of a man who had stolen a speedboat, then perished when the boat went up in flames.[2]