"Real Estate" is the 32nd episode of Haven, and the sixth episode of the third season, airing on Syfy on October 26, 2012

Audrey and the others investigate a Troubled event which takes them to a supposedly haunted house... which traps them inside.

On Halloween Chad and Tina in costume find themselves checking out the old Holloway house. While Chad tries the light switches Tina starts to freak as things start moving by themselves. At the Haven Herald office the party is not a thrill for either Audrey or Duke, but, when Tina comes in frightened out of her mind, they are happy to investigate. At the station Jordan McKee gives Nathan a burner phone from the Guard.

Leaving Claire and Tina outside, Audrey and Duke enter the Holloway house looking for Chad and find mirrors on every wall. He explains that Holloway disappeared, leaving his wife and daughters, who later disappeared. Audrey looks into one of the mirrors and, fainting, has a vision of herself as Lucy moving a painting to open a secret door. Duke helps her up and notices she has stepped in blood, which leads to the discovery of a dead Chad. Outside Tommy arrives and the three hear Audrey's voice through an intercom say they'd found Chad, so they go inside. Tina freaks when she sees Chad dead and runs off through the house. Duke notices where the front door was is now a wall and they are trapped inside. As they search the house looking for Tina, the house seems to change. Nathan arrives while Audrey and Claire were talking. He says that he got Audrey's call, but she explains there's no signal. A scream leads Duke and Tommy to a room which has a chandelier in which Tina is impaled. Jordan is staring at a pool of blood. They think she is responsible, but Nathan comes in and vouches for her. The intercom rings lures Duke and Tommy to find it and hear Nathan talking to Jordan trying to reassure her, but she says he's friends with Duke and his family kills the Troubled, so they should kill Duke.

Audrey accompanied by Claire finds the painting and opens the secret door leading to a room in which there are the rotted corpses of the Holloway women. The mother had killed her daughters and then herself. Audrey has a vision of herself as Lucy in the room with a man. Claire is worried that remembering could kill Audrey for each time she suffers. Audrey says that if Lucy was in the room, there must be a way out. As each of the investigators is separated by the house, Jordan is knocked down some stairs, passing out; Duke finds a gun; Audrey is called to an intercom and she sees in a mirror Roland Holloway. He explains that he is the house and that he is trapped because of her, Lucy. His wife adapted by putting up the mirrors and installing the intercom system, but eventually she couldn't cope any more, but Holloway wouldn't let the family abandon him. Audrey offers to help, but he didn't bring her to the house for her help. Her friends would suffer as his family suffered. With Tommy she returns to the secret room where she has another vision from Lucy's past, which shows that Holloway is responsible for his family's death and that he mustn't leave the house. She understands from her vision how to escape the house. She and Tommy find the others in a Mexican stand off ready to kill each other. She explains that this is what Holloway wants. The house is responsible for their conflict and they need to destroy the mirrors if they want to get out.

The plan works and outside they meet the Teagues and Dwight who has made a bomb to try to blow his way in. Instead, Audrey uses it to destroy the house. At the station Audrey shows Claire a missing person report for a James Cogan, which she obtained by supplying the first name she heard in a vision from the secret room and a composite sketch. This is the name of the Colorado Kid. Audrey quizzes Nathan and he says he trusts Jordan. Later he meets Jordan and comforts her. They kiss. At the Holloway house Dwight puts up a do-not-trespass sign and the camera cuts to the ruins of the house. They are slowly rebuilding. 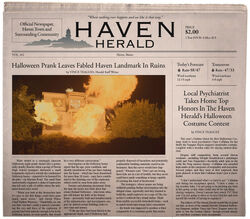 The explosion of the Holloway House is explained as a "Halloween prank" by Haven High students. Haven Police Chief Nathan Wuornos is quoted in the article saying that it is miracle that no one was hurt. Tina and Chad's deaths are neither mentioned nor explained, though the article does describe in detail how Roland Holloway built the house himself and his skirting of building codes and improperly placed gas lines are used to explain how a small how a small home-made explosive from the pages of The Anarchist Cookbook turned into an enormous explosion that levelled a house. While her death is not mentioned in the article on the destruction of the Holloway House, Tina Teagarden's "Little Bo Peep" outfit is mentioned in the article on the Haven Herald's costume contest. Claire Callahan won for her Buffy the Vampire Slayer-inspired outfit and her acceptance speech is quoted in the article.