Edit
This article is about the Season 3 episode. For the titular character, see Sarah Vernon.

An elderly man’s “trouble” sends Nathan and Duke back to 1955, where they search for a way back, but instead encounter Audrey’s alter ego from the past, Sarah.

Duke's father's diary leads him to seek out Stuart Mosley whose name was entered in the diary on the day Duke's grandfather, Roy, died. Mosley, now an old man, recognizes Duke, saying he shouldn't be there and suddenly Duke finds himself in 1955. Duke introduces himself to the bartender, and the bartender says his name is Junior. Soldiers in the bar start a fight and in the scuffle Duke saves the bartender from an accidental death. Duke is arrested when the police arrive. At the police station he notes a person being held has the Maze tattoo. Luckily the bartender whose life he saved vouches for him and he is released.

In today's Haven The Herald office doesn't exist: in its place is Haven Comics Shop. Nathan says Dave killed Vince fifteen years ago. In 1955 Duke finds a way to deliver a message to Audrey. In today's police station Audrey receives a letter held since 1955 in which Duke explains what has happened to him, so Audrey and Nathan go to see Stuart Mosley. Nathan finds a photo of Mosley on a porch table. Mosley vaguely recognizes Audrey, but says she should go before he has another episode. When he confronts Nathan, Nathan too disappears. Mosley says he knew Nathan and the other man from the past. He begs Audrey to leave telling her that bad things happen when he gets upset.

In 1955, Duke thanks the bartender, Junior, for bailing him out, then offers him a gold coin for whatever money he has in his wallet at that moment. The bartender agrees, saying his son is crazy over all that pirate stuff. Just as Roy hands over the cash, Nathan walks into the bar. As Nathan and Duke drink a few beers, they talk about the changes in the Haven Nathan just got sent back from. Nathan asks Duke if he's done anything of significance and Duke denies it saying he knows the rules of time travel. After a moment he realizes he did do something, he saved Junior the bartender. When the bartender brings them another round of beers, Nathan says that he's a little to tall to be a Junior, and then introduces himself to Nathan and Duke as Roy Crocker. Duke recognizes the name—his grandfather, who Sarah was supposed to kill according to his father's diary. Nathan tells Duke he has to correct his mistake, by killing Roy. Duke says he'll do it, removing his own family trouble at the same time.

In today's Haven, Claire tells Audrey that she needs to hide otherwise she'll be arrested for attempted murder for shooting Reverend Driscoll. Audrey tells Claire that they are in an alternate Haven, and Claire assumes that Audrey has PTSD from losing Nathan. Audrey, shocked, says that Nathan is alive and Claire tells her that Nathan died protecting Audrey from Reverend Driscoll's men. When Audrey starts walking back to the house saying she needs to talk to Stuart Mosley, Claire says she doesn't know about him but the Boydens have lived in that house for years. Audrey look at the mailbox in confusion, seeing it labelled "The Boydens" on the side. Claire says she's sure that there is a better Haven out there, but in the current one, Audrey is not safe so they need to get her out of sight immediately.

In 1955, Nathan frees the man with the tattoo that was arrested at the same time as Duke. Nathan shows him his own tattoo and the guys said he wasn't aware that they had a cop in the Guard. As soon as they are outside, Nathan tells the guy he's looking for Stuart Mosley. The guy tells him that Mosley was arriving the 1:15 ferry that day. As soon as they split up and go separate ways, a cop is seen eavesdropping on their conversation. He makes a phone call, telling the other person to meet him at wharf at 1:00 because there's someone they need to take care of, Roy is seen hanging up the phone on the other end. Roy fills out a birthday card and puts in the gold coin that Duke had traded with him earlier.

Duke, following Roy, sees him talk to a cop who wants him to kill Mosley. Roy refuses, so the cop goes to shoot him, when Duke clobbers the cop. Roy asks Duke what he's doing there and Duke tells him to run away. Duke goes to meet Nathan on the dock and when Nathan asks if he took care of Ray, he insists that he can make Roy take his family and leave before he ever meets Sarah. He insists to Nathan that Roy is a good guy because he doesn't want to kill people either.

Mosley arrives and his nurse is Sarah. At the hospital Nathan tries to see Mosley, but Sarah catches him and demands to know who he is. He quickly removes his hat, and gets shy, haltingly telling her he's a friend. She says that's the wrong answer, grabs him by the ear and drags him from the building. She yells at him as soon as they are outside the hospital saying her patient is actually making progress and if he has done anything to alter that she'll throttle him. Sarah asks why Nathan is looking at her funny and he tells her that she's incredible. Both can obviously tell that there's chemistry between them.

Duke attempts to persuade Roy to take his family and leave Haven to avoid being forced to do things he doesn't want to do. Roy is hesitant at first, saying he would need money and that he wouldn't know what to do. Duke tells him he can give him foolproof investment advice. He's successful, Roy saying he'll do it. Duke goes to the restroom. While he's in there Roy discoveres his diary and that it looks just like his. He hastily puts it away and hides when he hears the toilet flush. When Duke returns, Roy knocks him out.

Nathan and Sarah are on a beach. She says she has only just arrived. Her supervisor says that she is good with the strange cases. They discuss Haven and where she is actually posted. She says that she's learned that time is limited but all she can think with the two of them on the beach is that have plenty of time. Nathan starts to leave but Sarah makes a comment about always liking the shy ones. Nathan comes back and they kiss.

Duke finds himself tied up by Roy, who has read the diary and knows that today he is to be killed by Sarah. Duke tells Roy about who he is and how their trouble actually works. He convinces Roy that he is his grandson and that he can change their fate. Roy agrees, but decides to kill Sarah before she kills him. Nathan finds Duke and while he's untying him, Duke tells him what is going on and the fact that Roy intends to kill Sarah.

In today's Haven, Claire tells Audrey that the Guard is now smuggling the Troubled out of Haven. Audrey states that it isn't supposed to be this way in Haven. Claire says that she keeps saying that and no matter how often she says it, it still won't be true.

In 1955, Sarah is talking to Stuart while she pushes him around in his wheelchair. She talks about flowers and gardening showing how Stuart got into it in the future. She talks about how his platoon disappeared around him and how they reappeared a year later, thinking just seconds had passed, not even knowing that the war was over. She says that maybe they were just dormant like the lady slipper flowers they were looking at. Sarah also says that Stuart doesn't have to be afraid of something that can't be explained.

In today's Haven, Claire and Audrey meet with ex-chief Garland Wuornos. They are only able to talk about Audrey saying they were in the wrong Haven. Garland says that he hopes that her Haven is the real one because a son should outlive his father. Driscoll's men capture them all.

Nathan finds Sarah and tells her that someone is coming to kill her. He also says he knows Haven and even knows her, and that she has the strongest intuition of anyone he's ever met. He points out that she trusts him, despite the fact that she may not know why. Nathan gives her a gun and convinces her to run, telling her to meet Duke in the basement. She kisses him once before she leaves saying it's in case she never sees him again. However, as she goes to meet Duke, Roy stops her.

Duke convinces them to put their guns down. They both do it at the same time but Roy pulls a knife out of his pants. Duke tells him to stop, but Sarah shoots him before he can throw it. Nathan later tells her a little about Haven and the Troubled and asks for her help. With the help of the photo that Nathan found at Mosley's house in today's Haven, Sarah convinces Mosley to send them back to the present.

In today's Haven, one of Driscoll's men shoots at Audrey, but just before the bullet reaches her the present is restored. Audrey is back at Mosley's house, as are Nathan and Duke, who she quickly shoos away. Audrey asks about Sarah in the past and Nathan tells her they were actually her first case. Audrey then finally tells Nathan what she's been trying to for several days, the the Colorado Kid was actually her son.

In 1955, Sarah calls her supervisor—the same person as Audrey's Agent Howard—and asks to stay in Haven.

Coverage by the Haven Herald[] 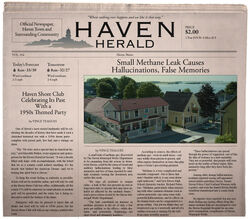 Duke and Nathan's trip to the past apparently left some Haven residents with memories of seeing Reverend Driscoll's militia, the dead Chief Wournos atnd the Haven Herald turned into a comic store. The Herald called these "hallucinations" and found the cause to be a small methane leak. The Herald also had an article on the Haven Shore Club and the Haven Historical Society throwing a 1950s themed party.