"Stay" is the 28th episode of Haven, and the second episode of the third season, airing on Syfy on September 28, 2012

Audrey, still reeling from her traumatic abduction, feels unsettled about her place in the world – a feeling further complicated when a horde of mindless wild men, who appear to have been abducted, drugged and subjected to strange experiments, begin terrorising the town. Meanwhile, Duke dives into one of Haven's greatest unsolved mysteries.

At the Dixie Boy Truck Stop, a naked, feral man enters the store and starts consuming food from the displays. Audrey arrives with Nathan and she tries to calm the man who has an animal collar and leash hanging from it, but the owner, angered by the soft approach, goes to attack the man. The man evades him, bites him and bursts through a window out into the night. Next morning at the police station Nathan suggests that the naked man could be a Troubled. Audrey meets a psychiatrist Claire Callahan, who is charged with counselling Audrey after her abduction, but Audrey avoids her when a report comes in of another sighting of the naked man.

They go out to meet Tor Magnusson, a farm owner, who points them to the barn, where the naked man was seen. An investigation reveals around ten such naked men and women, which Nathan jokingly describes as "cavemen". Before they can lock up the barn, Audrey sees Magnusson's son crawl into the barn. After returning to the room where the savages were nesting to find them gone, Nathan and Audrey split up to find Liam faster. However, Audrey and the boy end up barricading themselves in a small room when a particularly aggressive savage comes to investigate.

Nathan, who has concealed himself from the rest of the men and women as they put clothes on, comes to their rescue, disabling the aggressive savage with a stun gun and holding the others off with a pistol. The man gets to his feet and flees to the woods, taking the others with him and leaving one man, who Nathan shot in the leg, behind. Audrey emerges with Liam unharmed, much to Tor and Nathan's relief. Audrey then stops Nathan from shooting one of the naked men who had been hiding in the room with them. She had been able to keep him quiet while they hid by offering a cookie, and realised he was different.

At the station, Nathan assents to Claire's request to shadow Audrey at work. They are called down to the waterfront where Duke and Dwight have trapped a naked man in Dwight's truck. Audrey attempts to communicate but the man angrily breaks the glass and Duke is spattered with his blood. Duke to his relief does not react and thinks he has control over his own Trouble, but Nathan suggests that it is not the naked man who is Troubled. Claire receives the blood-work of another naked man that indicates he was drugged with a potent animal tranquilliser only used in Haven's pound. A visit there finds the place abandoned, a small animal cage with a naked human body buckled inside, dead, and half the leash of the first savage seen at the store. Audrey thinks the savages are stray pound dogs transformed into men.

Duke and Dwight go to see the Teague brothers to find out about the Hunter and Vince shows them copies of the Haven Herald from the Colorado Kid era. Most sightings of the dog men are places where a dog might go, except for their presence at Magnusson's farm. Nathan then finds that Magnusson had taken his dog to the pound the previous night. On the theory he might be Troubled they go back to Magnusson's farm. At the Herald Duke sees an article about Lucy Ripley gone missing. He also notices another about "The Hunter Meteor Storm".

Magnusson explains that his parents had made him swear never to have animals, which leads Audrey to conclude that he is Troubled. Claire finds that Liam is missing and reminds the others that dogs bury things that are precious to them. The dog men have taken the boy and they go into the woods to search for him.

In the woods they are surrounded by dog men and Audrey prompts Magnusson to talk to the aggressive dog man from before, which she surmises is the dog he had taken to the pound. By being humane to the dog man he reversed his previous inhumanity which had caused the dogs to become men. The change of heart transforms the men back into dogs, which run off. However, the reason Magnusson had taken his dog to the pound in the first place was because the animal had rabies and he was unwilling to get it shots. When the men transform back into dogs, the disease a human body could hold at bay overcomes the dog, and it dies before revealing where Liam is hidden. Magnusson is distraught and begins shouting into the woods. However, Liam is later found by the dog Audrey had rescued from Magnusson's farm.

At the Herald Vince shows Dave that the backroom has been ransacked by the man who kidnapped Audrey. At the Grey Gull Audrey is about to take her new dog for a walk, when Duke tells her that both Sarah and Lucy disappeared on the night of the Hunter meteor storm, which comes every twenty-seven years. The next such storm is in 49 days. A dismayed Audrey decides to give the dog to Liam instead. 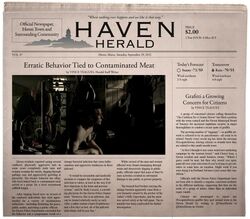 In an article titled "Erratic Behaviour Tied to Contaminated Meat", Vince Teagues blamed the incidence caused by the dogs-turned-men on a strange bacterial infection that caused hallucinations and erratic behaviour. The source of the infection was tracked to cow "formerly owned by the pitched of the Tarker's Mills Tigersharks". The article included quotes from Dr. Rudy Lucassi, a consulting physician for the HPD.

This edition of the Herald also included an article about a recent rash of graffiti, most of which said simply "#EscapeToHaven". The Coalition for a Cleaner Haven filed a petition with the Town Council and the Haven Municipal Board of Trustees to try and get more nighttime security.