"The Farmer" is the 29th episode of Haven, and the third episode of the third season, airing on Syfy on October 5, 2012

After corpses missing vital organs start popping up around Haven, Audrey and Nathan embark on a manhunt for the most sadistic troubled person they may have ever faced. Meanwhile, Duke must confront the fate his father warned him about: becoming Haven’s curse killer.

A jogger is found by his fiance, Sherry, dead not far from the track with blood around his mouth and a pair of lungs beside the body. The medical examiner, Dr. Lucassi, shows that no incision was made to the man's body and guesses the lungs came out through the mouth. A man wearing a Trilby hat photographs the corpse with his phone from a distance, enlarges the image and sees the lungs.

At the station Audrey tells Nathan about the fact that she only has 46 days left before she would disappear (see previous episode). Casey explains that the lungs were diseased. He adds that the lungs weren't those of the victim. Nathan goes to interview Sherry, but she has already been questioned.

Nathan explains to Audrey that Sherry was questioned by 35-year-old black male calling himself Tommy. A call for a disturbance comes in causing Nathan and Audrey to investigate. They find Tommy in the Trilby hat bending over a body at the address. He explains he's a cop, but Nathan cuffs him. There are kidneys on the floor by the body. He explains that he is chasing someone who'd removed the liver from a victim in Boston, his trainee partner. Upstairs they find the victim's sister, Zoe.

At the station, Zoe is in a bad state. Stan shows his nephew Mark around the station.

Tommy tells Audrey and Nathan that he was in Haven because witnesses had seen the perp wearing an East Haven Sea Dogs jacket. There is a scream from the corridor. Zoe has attacked Mark, pinned him to the floor and opened her mouth, prepared for who knows what, when Tommy knocks her out.

At the hospital Claire explains to Audrey that Zoe's organs are failing one-by-one. Nathan receives word that the diseased lungs and the kidneys were from the same person. Audrey conjectures that the killer is Troubled which causes his organs to fail, so he needs healthy ones. Claire notes that the most suitable organs come from family members. Nathan adds that if the attack succeeds, he gets the organs; if the victim gets away, their Trouble is triggered and they too need new organs. Nathan asks Stan if Mark is related to Zoe. Stan doesn't know, indicating that Mark's mother had used a sperm donor. Tommy says that his trainee's mother had used a sperm donor as well.

Nathan subpoenas the records of the local fertility clinic. They speculate that the killer has supplied his sperm at the clinic so that, when the Troubles returned, he'd have a stock of organs. And if these children's Trouble is triggered they will have to harvest organs themselves. Audrey says that the cycle must be broken.

Harry Nix is surveying his next victim, a young woman.

Audrey has asked Duke to help interview the children and at the house of the third name Duke sees the girl and a man wearing a Sea Dogs jacket. Nix grabs the girl and from his mouth comes a snake-like tongue moving at the girl, but Audrey shouts and the man jumps into his car and drives off. The girl is in a bad state.

Tommy doesn't believe Nathan's story about the Troubles. Audrey calls and Nathan gets an address from the license number of Nix's car, but Audrey and Duke find he and his family have gone. Audrey surmises that Nix will soon need organs, so they go off to the nearest child in the fertility clinic records. The child is not there so Nix takes his own son off "for a pit stop".

Nix's body is failing him as he prepares to remove organs from his son. Audrey and the others catch him before he can do it. Tommy sees the tongue return into Nix's mouth. The boy is in shock. His father is dying. Audrey tells Nathan to take Tommy and the boy away. She tries to get Duke to kill Nix, but, realizing that this was Audrey's plan all along, he refuses.

At the morgue among the victims' bodies is one whose nose had been surgically removed and a woman who had been killed with a bolt gun, just as Roslyn Toomey had been. At the station Audrey deliberately alienates Nathan.

She explains to Claire that bad things happen to the men she has loved. She receives a text that makes her leave. At the Grey Gull, Duke is drinking. Audrey tells him that all those in Nix's extended family who were Troubled had mysteriously recovered. In flashback, Duke recalls exiting the woods and spotting Connor with his terrified mother and sisters, then changing his mind and returning to Nix after Audrey leaves him in order to suffocate the Troubled man and end the lineage of his affliction. At the Grey Gull, Duke wordlessly leaves Audrey at the bar.

In his motel room, Tommy hears someone trying to open the door, and grabs his gun off the bed.

Tommy drives to a remote location and opens the trunk of his car; on his cellphone, he tells his supervisor with the Boston Police that he is quitting his job in Boston in order to accept Nathan's job offer. He hangs up and removes a body from his trunk, dragging it out into the forest to bury it. 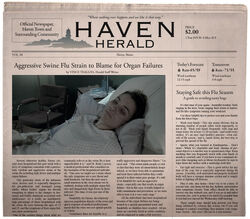 The Haven Herald explained the rash of organ failures caused by the Nix Family Trouble as the result of an aggressive strain of swine flu that is particularly dangerous to young people ages 12-25. Dr. Rudy Lucassi was quoted in the article. The article mentioned that all of the people hospitalized with this strain of the flu were quarantined and said that they were no casualties. Presumably the deaths cause by Harry Nix and Harry Nix's own death were given different explanations, perhaps in a later edition of the Herald. The Herald ran a front-page column on tips to help Haven residents stay well during flu season alongside the main swine flu article.